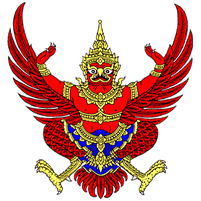 Being the 63rd year of the Present Reign

His Majesty King Bhumibol Adulyadej is graciously pleased to proclaim that :

Whereas it is deemed appropriate to revise the Act on Land Development;

This Act contains certain provisions in relation to the restriction of rights and liberties of persons, which Section 29, in conjunction with sections 33, 41 and 43 of the Constitution of the Kingdom of Thailand, so permitted by the virtue of law.

Be it, therefore, enacted, by His Majesty the King, by and with the advice and consent of the National Assembly as follows:

Section 2. This Act shall come into force as from the day after the date of its publication in the Government Gazette.

“Land development” means any act done to the soil or land in order to increase the efficiency and quality of soil or land, or to increase agricultural productivity, and shall also mean improvement of soil or land, which is infertile either by natural cause or utilization, and the conservation of soil and water for maintaining balance of nature or suitability in utilization of land for agriculture.
“Policy and planning of the utilization of the land” means policy making and planning of the utilization of lands to suit the condition of soil and to conform to the category of the classified land.
“Soil” shall include stone, gravel, sand, mineral, water and other organic matters mixed in the texture of soil.
“Land” means the land under the Land Code Act.
“Land census” means the survey, detailed condition of occupation of the land, list of farmers relating to the utilization of the land for agriculture, residence, commerce and industry.
“Land economics” means the economic relationship between the population and the land.
“Agriculture” means paddy rice farming, field crop farming, horticulture, animal husbandry, aquaculture, and other enterprises determined by the Minister of Agriculture and Cooperatives, as announced in the Government Gazette.
“Soil erosion” means a phenomenon which the land is eroded by the force generated by water, wind or other causes and resulting in soil deterioration, loss of soil or soil fertility.
“Soil and water conservation” means any action aims at preventing the soil and land from deterioration and loss, including any act for maintaining and improving soil fertility to preserve groundwater and surface water to maintain balance of nature and to suit agricultural use of the land.
“Mechanical measure” means any soil and water conservation measure using construction of engineering structure, including contour cultivation, levee, field terrace, bench terrace, hillside ditch, farm pond, etc.
“Vegetative measure” means any soil and water conservation measure using plants through planting crop or utilizing any part of plant to make strip or row; or in covering surface of the ground or in other means.
“Board” means the Land Development Board.
“Member” means a member of the Land Development Board
“Competent official” means any person who is has been appointed by the Minister for the execution of this Act.
“Minister” means the Minister having charge and control of the execution of this Act.

Section 7. A qualified Members whose term have expired can be reappointed but not for more than two consecutive terms.
When an qualified Member vacates the office before the term ends, the Board shall consist of the remaining Members until the new appointment of the replacing qualified Member is made according to Section 6, Paragraph 2.

Section 8. In addition to the vacation of office upon the expiration of term, a qualified Member vacates office upon:

Section 9. The Board shall have the following powers and duties:

In performing the duty under this Section, the Board may assign the Land Development Department to be the executing agency or to prepare proposals to submit to the Board for further consideration.

Section 11. In performing the duty under this Act, the Board may appoint a sub-committee to consider or carry out any task as assigned by the Board. In this connection the procedure of sub-committee shall be governed by the regulations of the Board. Section 10 shall be applied to the meeting of the sub-committee mutatis mutandis.

Section 12. The Minister, by the advice of the Board, is authorized to announce, in the Government Gazette, the area of land utilization as prescribed in Section 9(2) with a map attached to the announcement. The map shall be considered an integral part of the announcement.

Section 13. In case that any area has steep gradient and is prone to soil erosion or landslide due to action of a person who possesses and utilizes the area improperly, or natural cause, which nonintervention shall cause severe land erosion to the extent that land slide might occur and result in loss of lives and properties to the general public, the Minister, through the advice of the Board, is authorized to announce, in the Government Gazette, such area as soil and water conservation area, with a map attached to the announcement. The map shall be considered an integral part of the announcement.

Section 14. In case that any area has usage or contamination of chemical substance or any other object that will cause agricultural use of land to deteriorate, the Minister, through the advice of the Board, is authorized to announce, in the Government Gazette, in order to control the land usage in such area, with a map attached to the announcement. The map shall be considered an integral part of the announcement.
In case that contamination occurred, the contaminator shall be responsible for recovering the land to the former condition, or to compensate the state or the aggrieved party.

Section 15. In issuing announcements under Section 12, 13 and 14, one of the following measures must be prescribed in the announcement :

In prescribing measures according to (1), (2) and (3), a public hearing of people who may be affected by such measures has to be organized.

Section 16. The Land Development Department shall have the duty to survey, analyze and examine the soil or land in order to determine the natural fertility, suitability for utilization, economic potentiality of the land or for the sake of land classification, land development, and allocation of land use areas, soil and water conservation areas and land census for implementing of this Act and any other task assigned to it by the Board.
The Land Development Department has power and duty with regard to statistics under the law on statistic concerning land census for implementing this Act.

Section 18. In the survey area for determining natural fertility of the land, suitability for utilization, and soil and water conservation areas under Section 17, the competent official is authorized to enter into an owned or possessed plot of land from sunrise until sunset in order to collect samples of soil or water or to make survey marks on the land or in the water as proper and necessary. The owner or possessor of such land must be informed in writing not less than 15 days in advance.
The announcement must be posted where the land is situated or at the office of Khet or Amphoe or at the office of Kamnan or Khwaeng in which that land is situated. The announcement shall also specify time and acts to be performed.
In performing of duties under this Section, the person concerned is required shall accord the competent official reasonable facilitation and the competent official shall present identity card to those concerned.
The identity card of the competent official shall be in the form specified in the Ministerial Regulation.

Section 20. Any person who wishes the Land Development Department to analyze a soil sample or to improve the soil or land, or to conserve the soil and water; or to provide map or map data, except map or map data that involves with the national security of the country, must submit an application to the local land development agency where that land is situated or, if there is no such agency, to the office of Khet or Amphoe.
The analysis of the soil sample, improvement of soil or land, conservation of soil or land, or provision of map service or map data under the first paragraph, including the analysis of soil samples to improve the soil or land for agriculture of farmers, shall be carried out according to rules, methods, and conditions and expenses prescribed in Ministerial Regulation.

Section 21. Whoever violates Section 15 or obstructs the competent official in performing any duty under Section 18 shall be liable to imprisonment for a term of not exceeding three months, or to a fine not exceeding 5,000 baht, or both.

Section 22. Whoever causes damage to, destroys, alters, moves or removes the survey mark made by competent official under Section 18 without permission of authorized official, shall be liable to imprisonment for a term of not exceeding one month or to a fine not exceeding 1,000 baht, or both.

Section 25 The Minister of Agriculture and Cooperatives shall have charge and control of this Act and shall have the power to appoint competent officials and to issue Ministerial Regulations and Notification for the execution of this Act.