Buying a Thai Home
foreign ownership of a house

Foreigners cannot own land in Thailand but are allowed to lease land under a land lease agreement registered with the land department and own the structure built on leased land. Obtaining the correct legal ownership of the building upon the leased land greatly increases the land lessee's rights and long term interest in the property. The right to own a building upon another man's land however always relates to the right to use and possess the land, i.e the term of the land lease (and optional the term of an additional right of superficies).

Ownership documents for a building

Land has a title deed document. A structure or building in Thailand separate from the land does not have an ownership deed (except units in a condominium). Some suggest this (ownership document) would be the tabien baan or house book but this is not correct. Proof of ownership (ownership by possession) could generally be established by either a land lease giving the lessee the right to build and the building permit (preferably issued in the lessee's name) or the Thai script sale of a structure document, issued, signed, stamped and administrated by the local land office.

How to transfer ownership of an existing house

The transfer of ownership of a structure separate from the land must be in writing and registered with the competent authority (the local land office) in order to be complete. Under Thai contract law the sale of an immovable property is void unless it is made in writing and registered by the competent official (civil code section 456). The following steps are generally involved for the transfer of ownership of a house in Thailand (i.e. transfer separate from the land it is on):

This for example means that when a developer in Thailand offers a land lease and a sale agreement for the house the transfer of the structure must still be effected according to the above described procedure at the local Land Department's provincial or branch office and transfer of ownership taxes and fees must be paid.

Alternatively the developer could (instead of a sale agreement for the house) offer a construction agreement in addition to a land lease agreement. In this case generally 'VAT' (value added tax) is charged and the building permit must be issued in the purchasers names, or the building permit should be changed before final completion to the purchaser's name. In case a house sale agreement is offered transfer fees and taxes are charged in the official transfer procedure as described above.

transfer tax and fees for a house

Normal property transfer fees and taxes apply to the transfer of ownership of a house separate from the land it is on and must be paid at the time of issuance of the sale of structure document by the local Land Registry. Some of the rates are based on the actual sale price or appraised registered value of the house. The government appraised value of the house depends on the location and floor area of the house, number of floors and materials used (e.g. wood or concrete).

When both land and house is leased (ownership of the house has not be obtained) a yearly building and land tax shall be charged on the owner at a rate of 12% of the yearly lease value. It will reduce tax liabilities when the structure upon leased land is owned by the lessee (Read more...). 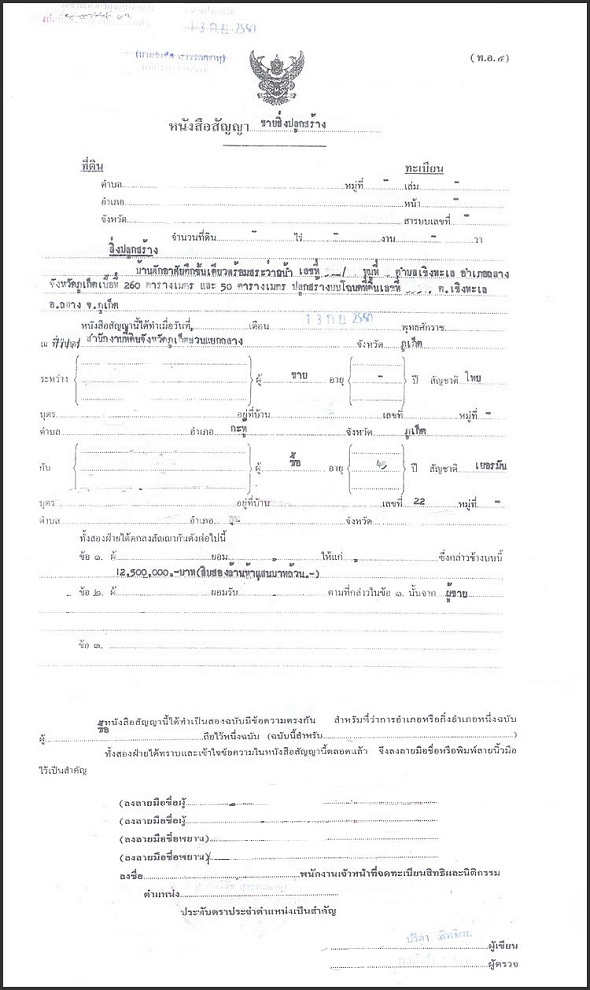